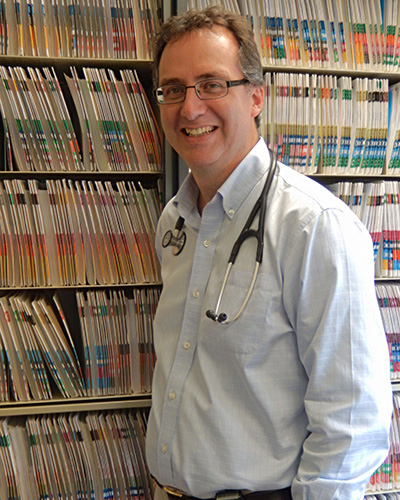 Dr Robert Kelley is the 2013 recipient of the Family Physician of the Year Award for Prince Edward Island (PEI). This award recognizes outstanding CFPC family physician members—one in each province—who exemplify the best of what being a family physician is all about.

Dr Kelley began his medical career at Summerside Medical Centre in PEI, where he provided comprehensive family medicine, including obstetrics, and worked as an emergency room physician at Prince County Hospital. In 2000, he moved his practice to Charlottetown, where he continues today, also serving as house physician at the Prince Edward nursing home and as a staff physician at the Queen Elizabeth Hospital, the provincial correctional centre, and the provincial addiction services facility. Since 2010, Dr Kelley has served as core preceptor with the PEI Family Medicine Residency Program and has been a faculty member at Dalhousie University in Halifax, Nova Scotia, since 2011.

Actively involved in the community, Dr Kelley coaches the Charlottetown Abbies Midget A Girls Hockey Team and volunteered as a coach for the Charlottetown Abbies Soccer Club for two seasons. Since 2009, Dr Kelley has participated in the UPEI Ambassador Family Program for international students, a program that welcomes new Islanders into the homes of PEI residents for meals and a history lesson over the course of the school year.