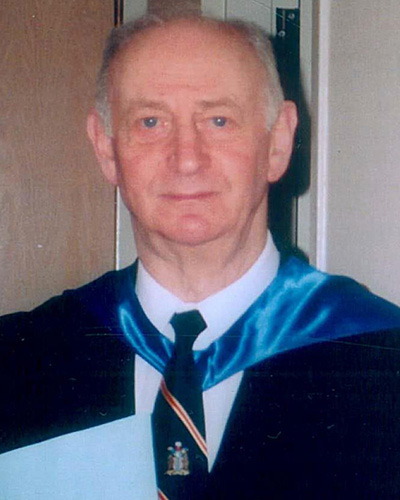 Educated in London, England, Dr Valentine practised in Great Britain and Sierra Leone before coming to Canada in 1969. A visionary who was passionate about research, Dr Valentine began recording information about the illnesses, diseases, and problems he saw in his practice in an “ebook” soon after coming to Canada. The ebook, used by researchers before the advent of computer technology, was a multi-ringed notebook that held cards on which physicians recorded details of each encounter with a patient.

Dr Valentine believed that data gathered by family physicians would be valuable in helping to define and determine the content of family practice in Canada, and that the data could be used to better understand the practice patterns in various areas of the country. He also believed that such data could help practitioners plan for the future and help in the education of future family physicians, to ensure that what they learn would be relevant to the world they would soon be entering. In addition, and of equal significance, Dr Valentine wanted to satisfy his own interest.

Dr Valentine’s ebook provided an unusual service during the forest fires that threatened the small town of Gillam, Manitoba, in the summer of 1989. Town officials asked Dr Valentine, who was a practising physician in the small town, to provide a list of patients whose illnesses would be exacerbated by inhaling smoke from the fires. Within hours, he had provided the information, and 250 people were evacuated from Gillam.

An assistant professor in the University of Manitoba’s Department of Family Medicine in Winnipeg, Dr Valentine was a Fellow of the CFPC, and served as President of the CFPC’s Manitoba Chapter 1976–1977. He was the recipient of the CFPC’s Family Physician of the Year award in 1991 and was one of the CFPC’s distinguished builders of family medicine research.

Dr Valentine’s curiosity and love of the investigative process extended into his leisure hours: he was a member of the Sherlock Holmes Society, held a solo pilot’s certificate, and was a volunteer at the Western Canadian Aviation Museum in Winnipeg, where he did research and cataloguing. Dr Valentine passed away in 2006.