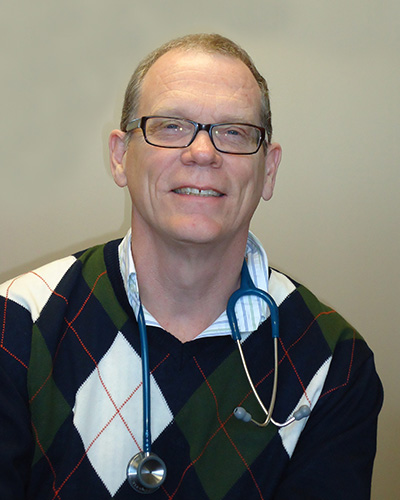 Dr Ted Osmun is honoured for his commitment to rural family medicine and his dedicated work with First Nations communities. He has served in a variety of rural and remote settings, including Baffin Island, Manitoulin Island, and Mount Brydges, near London, Ontario.

Dr Osmun earned his medical degree from the University of Western Ontario (UWO) in 1979. He received his certification in family medicine from the College of Family Physicians of Canada (CFPC) in 1991, and became a Fellow of the College in 2004. He also completed a Master of Clinical Science degree from UWO in 1999.

In 2001, Dr Osmun was appointed Associate Professor in the Department of Family Medicine at the Schulich School of Medicine and Dentistry at Western University. As a rural-regional program director for the postgraduate program, he has developed several continuing professional development activities to engage rural and regional faculty.

In addition to his clinical work, Dr Osmun provides in-patient and emergency care at Strathroy Hospital. He has also served in all capacities of the hospital’s Medical Advisory Committee. Throughout his career, Dr Osmun has maintained several professional affiliations, including the Ontario Medical Association and the Society of Rural Physicians of Canada. His work has been published in the areas of clinical care, medical education, and patient-doctor communication.

In 1999, Dr Osmun received the Excellence in Clinical Teaching Award from the Professional Association of Residents of Ontario. In 2002, he was the recipient of the CFPC’s Ian McWhinney Family Medicine Education Award for excellence in resident teaching.
Dr Osmun wishes to acknowledge his wife, Anita, who has supported him throughout his career: caring for their children, building decks and fences, traipsing all over the world, and encouraging him in all his endeavours.