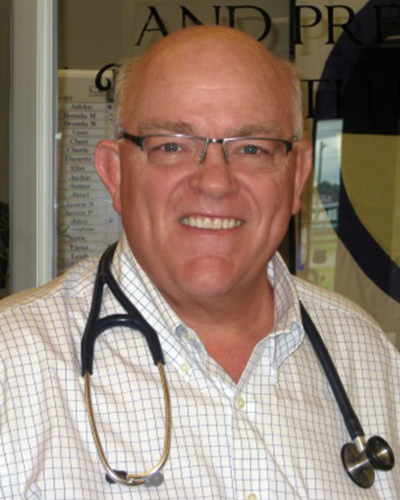 A pillar in his community, an innovator in rural family medicine, and an integral partner in establishing a family health team in Fort Frances, Ontario, Dr Robert Algie is recognized for his dedication to and advocacy for rural health care.

After graduating from Queen’s University in 1980, Dr Algie completed a rotating internship with the Ottawa Civic Hospital in 1981. In 1989, he received Certification in Family Medicine from the College of Family Physicians of Canada, and he became a Fellow in 1998.

For the last 35 years, Dr Algie has practised comprehensive rural family medicine with Nelson Medicine Professional Corporation. There, he advocates for the adoption of electronic medical records and established the local family health team, of which he is the lead physician. Since 1997, Dr Algie has served as Chief of Staff with Riverside Health Centre. He also works closely with the aboriginal community in providing primary care and consulting with nurse practitioners at the Gizhewaadiziwin Health Access Centre.

As a preceptor with the Northern Ontario School of Medicine (NOSM), Dr Algie’s dedication and passion for rural family medicine has emanated through his mentorship of family medicine residents, undergraduate and medical students.

Dr Algie has served on several committees and boards. Currently, he is Executive Member-at-Large of the Ontario Medical Association (Rural Section) and a board member of NOSM. He served on the Executive Committee of the Ontario College of Family Physicians for four years before serving as president in 2009.

You can catch Dr Algie in the audience of various community events or piping with the Rainy Lake Highlanders. He enjoys skiing, spending summers on his sailboat, and traveling with his wife, Janet. Together, they have two children, James and Heather, and a golden retriever named, Murphy.