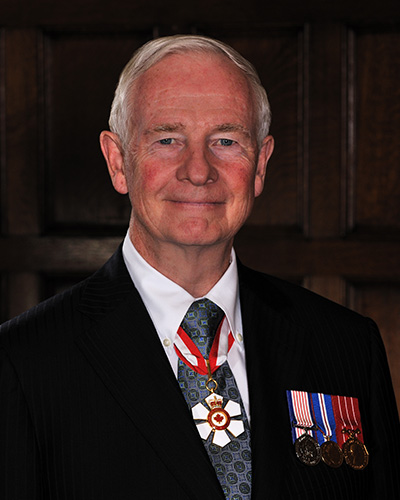 David Johnston is the 2013 recipient of the Honorary Membership Award. This award recognizes individuals who are not family physicians in Canada, but who have made outstanding contributions to the CFPC, the discipline of family medicine, the health system, or the health and well-being of the population in Canada or abroad.

Mr Johnston has served on numerous provincial and federal task forces, committees, and public company boards. He was president of the Association of Universities and Colleges of Canada and of the Conférence des recteurs et des principaux des universités du Québec. He was the founding chair of the National Round Table on the Environment and the Economy and chaired the federal government’s Information Highway Advisory Council.

Mr Johnston’s specializations include securities regulation, information technology, and corporate law. The author or co-author of 24 books, he holds honorary doctorates from two dozen universities, and is a Companion of the Order of Canada.

Sworn in on October 1, 2010, His Excellency the Right Honourable David Johnston is the 28th Governor General since Confederation.